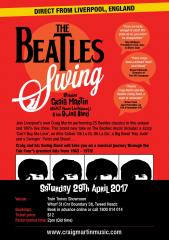 ‘The Beatles Swing’ is a show which showcases a brand new take on The Beatles songs, an 8-piece swing band, two talented backing vocalists and of course Craig Martin himself!
It features the song writing talents of all four members of this supergroup, spanning the years 1962 to 1970. Craig and a team of Brisbane composers have rearranged the songs making old new again! Craig adds “We haven’t turned the songs on their heads, they have just been reworked and we’ve given them a Big Band swing/jazz twist, using a rhythm section consisting of piano, drums and bass and adding a brass section of alto and tenor saxophones, two trumpets, a trombone and a clarinet”.
Every change which Craig has made to the songs has been sanctioned by the custodians of these precious works with each music chart having been submitted to Sony/ATV, Universal Music and even Paul McCartney’s own music publishing company MPL for their stamp of approval, without which Craig’s vision for the show would not have been realised.

Craig’s ‘Merseybeat’ background helped him secure the permissions to rearrange the songs. Having performed regularly at The Jacaranda and The Cavern Club in the 1990’s Craig’s own musical journey followed that of the Fab Four in their early years. Craig had the privilege of touring the UK, Europe and South Africa with Liverpool legend Gerry Marsden as a guitar vocalist in Gerry’s autobiographical show ‘Ferry ‘cross the Mersey’. “Like most budding young musicians growing up in Liverpool The Beatles were a big part of your musical education, so to get to spend many months touring with someone who shared their journey was very special, Gerry told me lots of stories about the early years, some of which I may even share with the audience at the show!” he said with a wink of an eye.

Craig has a huge personality and is fast establishing himself as an ever popular choice for music Festivals both in Queensland and interstate. Craig has now performed alongside such greats as Normie Rowe, Darren Percival, David De Vito, Mahalia Barnes and Andre Rieu’s chief Soprano Mirusia; he was even lucky enough to have James Morrison’s principle vocalist and ‘The Voice’ Jazz sensation Emma Pask open up his Gold Coast Show.
Craig will perform The Beatles Swing with eight of the finest musicians in Queensland and to bring extra glamour to the stage the show features a female backing duo, The Fab Two!

He is delighted to be bringing a little bit of his home town Liverpool to Twin Towns this April, following in the footsteps of other great Liverpool singers who have graced the Twin Towns stage over the years.
From a Jazzy ‘Can’t Buy Me Love’ to an Afro-Cuban ‘Ob La Di, Ob La Da’, a Big Band sounding ‘Hey Jude’ to a swingin’ ‘Twist and Shout’ this show has everything a lover of The Beatles, Big Band Swing & Jazz, great musicianship and 100% live music could ever want!

Don’t miss your chance to catch this show before it moves onto Vegas and the UK later this year.
Get you tickets now and you’ll be saying ‘Yeah Yeah Yeah!